Obviously, there is no doubt that ranking in the first positions on Google search engine is good. We all approach the world via Google, so it’s obvious that whoever is ranked high makes a living. You don’t have to be an expert in website marketing or Google Optimization to understand that surfers do not reach the second page and that only those on the first page or in the top positions get the customers.

But how do you promote your website nowadays, and is it true, as some say, that ‘website marketing is dead’?
In order to answer that question, we need to understand the three principal stages Google has been through.
Google, by the way, change their search algorithm for Google Optimization hundreds of times a year (over 500). The change can be a minor, barely noticeable one, or it can be a dramatic change like “Panda”, which rocked the foundations of the website marketing world.

In order to clearly understand it, we will go over the evolution of the three primary stages in website promotion.
In the beginning – it was a technical world, a world of links. If someone, “talked about you” (linked to you) and they ranked well, then you were doing well. In other words, and pardon our French, whoever was bigger won the game.

Why? Because competitive arenas like Vacation, Real Estate and Gaming came along and said to themselves “If what they (Google) want is links – then life is good. Let’s employ dozens of inexpensive workers, to create manual links in nearly unlimited quantities”.

After all, labor was cheap and the competitive world had a ball.

During the second stage – Google woke up and realized the world could not be built on nothing but links; therefore, websites need to have “fresh content”. Within a short while, the businesses from the competitive arenas regained their composure and said “Fine. Fresh content is what Google wants? No problem. We’ll see it gets fresh content daily”. An article from abroad costs $3.5 we’ll post 20, 30 or 50 articles on the website per day and blast the internet with content that is utter garbage, so long as it’s fresh”.
Over the past few years, Google has been looking into the matter and realized that it has to stop that too. The results were just no good, the content contributed nothing to the users and did not reflect real business; consequently, they completely changed the algorithm.
From that point on, the field of website promotion really and truly changed. The change was not in the content or in the number of links. Putting it simply, the change was “everything you can’t fake or buy”. For example, can you fake traffic between pages? No. Can you fake the time spent on the website? No. Can you fake your link being sent by email from one person to the next? No. And numerous other things.

All these actions, none of which are possible to fake, received value, and the opposite, respectively. In other words, everything your competition can do or buy with money will have zero value. For example, if you can purchase an article for three dollars, and post it on an Article Base, so can your competition and that is not a good thing.

Another example is if you can buy “quality” links on “Fiverr”, for example, so can your competition, and that is no good, etc.

In other words – the world of website promotion has changed and instead of technical, it is now creative.

Now, whoever manages to actually bring visitors to their website in practice, and cause them to spend time on it, and whoever is actually interesting – is the winner.
So why do they say that website promotion is dead?

Because they don’t know how to decipher it. Obviously, it’s easy to buy links and to get the website to climb the ranks, but that isn’t what we are talking about today. People who are not creative, not content oriented enough, and don’t understand enough, are the people claiming website promotion is dead.

People who can decipher the creative formula, know website marketing is alive and kicking, and is, of course, excellent and indispensable for businesses. 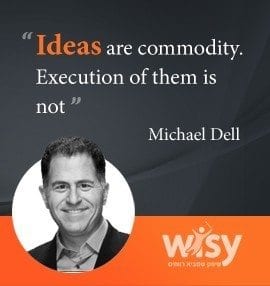 Want to elaborate over coffee?
Insert your mobile here and we'll contact you shortly‏

Looking for a partner in Israel?